The river has been at the heart of the city of Bangkok since it was founded in 1782, and even before when the city was the built by King Taksin when he established new capital of Thonburi.

As early as 1538 there was a town at the mouth of the Chao Phraya river as it offered a perfect spot with access to fresh water, access to the sea, and land as well.

Since historic times Thai man has been shaping the river to make it more useful to him. As late as the 20ths century new canals have been built to shorten the river by cutting off meanders, thereby creating new islands such as Koh Kret.

Before the 14th Century settlements existing around the river in the area that is now Thonburi, but of course these were not known as Bangkok as that name comes a lot later.

It was during the time of the great Ayutthaya Kings that modern Thailand was formed and they chose the capital to be in this place.

Around 1540 the King Chairacha decreed that channels should be cut into the land of Thailand to make the river more easy to navigate. This created an island village and it is from the Thai words for this that the name Bangkok is derived.

It was the Predecessor of King Rama I, called King Taksin, who made his capital first that Thonburi but then expanded it into the area which is modern Bangkok in 1768. The Kings palace was built between the two great temples of Wat Chaeng (Wat Arun) and Wat Thai Talat (Wat Molilokkayaram) and these now form the modern Grand Palace complex.

When the Europeans first arrived in Thailand, which was called Siam at this time, in the 1820s they found Bangkok to be a bustling international trading center with merchants from all over the region, but particularly from China, operating prosperous business.

Under the reign of the great Rama IV it was declared that Thailand should adopt the best of Western ideas and technology and integrate them into Thai society. And hence the modern period of Thai history and industrialization was begun.

In the early part of the 20th century much modernization happened in the city itself. In 1932 the Memorial Bridge was constructed to connect Thonburi to Bangkok proper, helping with modern growth and economic prosperity.

By 1975 a government Metropolitan Administration was formed, which now has an elected governer, to guide the city into the 21st Century.

Many Historic Buildings are to be found on the river. 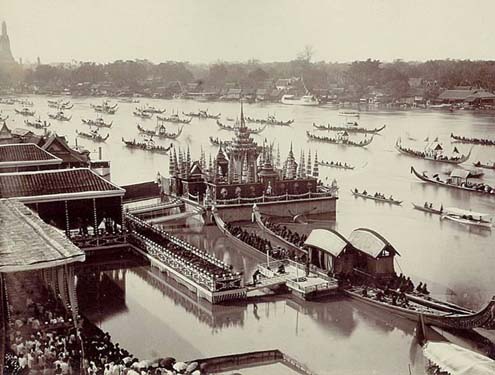 The River of Thailand

The river stretches from the north all the way into the Gulf of Thailand, with the Chulachomklao Fort being placed near the end where it joins with the sea.

Starting quietly in the hinterlands the river is formed from the confluence of two smaller rivers, the Ping and the Nan. Together at Nakhon Sawan (also called Pak Nam Pho) they come together quietly in a rual setting some 200km north of Bangkok.

Due to the winding course of the river it takes almost 350km for it to reach the city and the sea.

Many tributaries and canals intersect the alluvial plain that is created by the Chao Phraya river, and the Tha Chin river which starts from it and runs parallel into the sea.